During 2011-2013 and while working at the Large German Wave Flume in Hannover, Germany, I gained extensive experience in physical modeling.

Beach topographic and hydrodynamic measurements are essential for coastal geology and engineering studies as well as sustainable coastal management. Standard approaches involve either time-consuming manual data acquisition usually with limited coverage or remote sensing techniques which are usually characterized by low resolution or increased costs. In collaboration with the Real Time System department of the Leibniz University of Hannover we tried to show the capabilities of the autonomous robot RTS-Hanna with a calibrated sensor setup including 3D laser range scanners, a camera, a Differential GPS and an inertial measurement unit which significantly facilitates field data collection. RTS-Hanna was tested at the Wadden Sea Barrier Island Langeoog, Northern Germany, for two days and was proven capable of autonomously collecting topographic scans. 175 GB of dense topographic and water surface elevation data were collected, including RBG images, while RTS-Hanna covered a total of 21 km of coastline in approximately 3 hours. Scans of the surf/swash zone allowed continuous measurements of topographic changes at the beachface, wave propagation velocities and wave breaking heights.

The following image is showing an example of the Laser point cloud, combined with the video camera images. Real time 2D scanning of waves is possible, while the fusion with the images provides color information for the point cloud. Click on the image to see an animation. 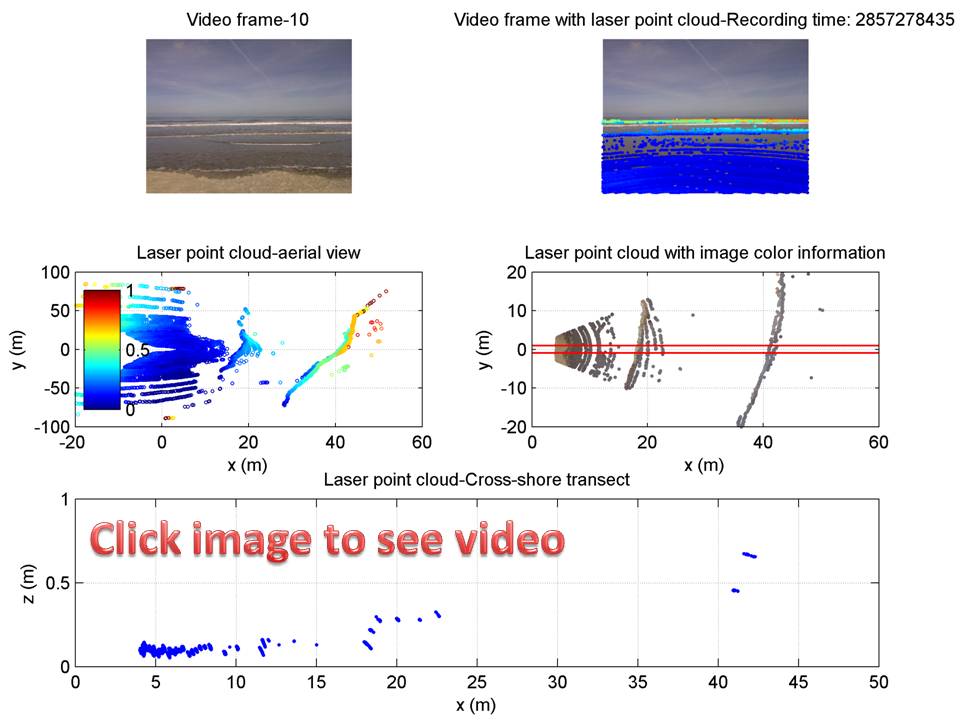 PIV meaurements of flow velocities in the swash zone: The swash is characterized by a lot of features and as a result PIV works fine without the need of seeding to track motion. 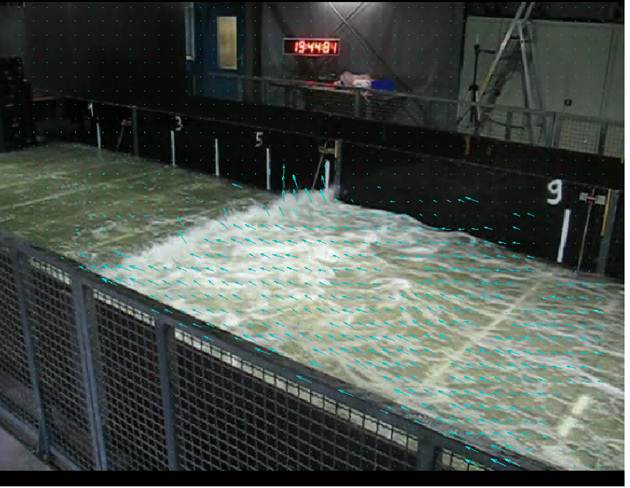 Stereo visio to generate 3D surface models of the bed: Stereo can be a very accurate and cost effective approach to measure 3D surfaces (of sediment but also water) and in LGWF there are available different stereo systems for static and dynamic measurements which have been applied successfully in different projects 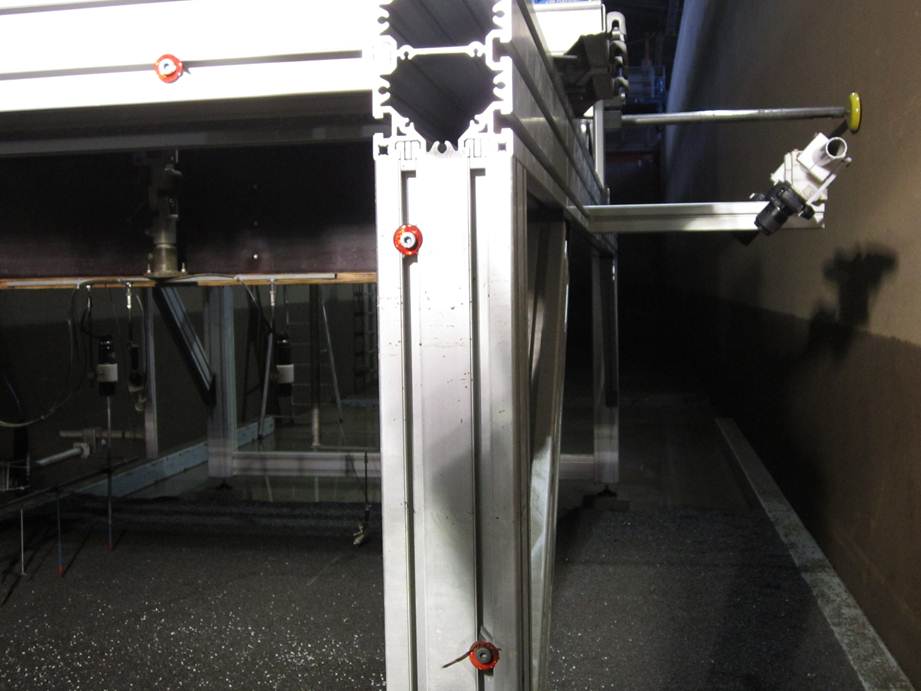 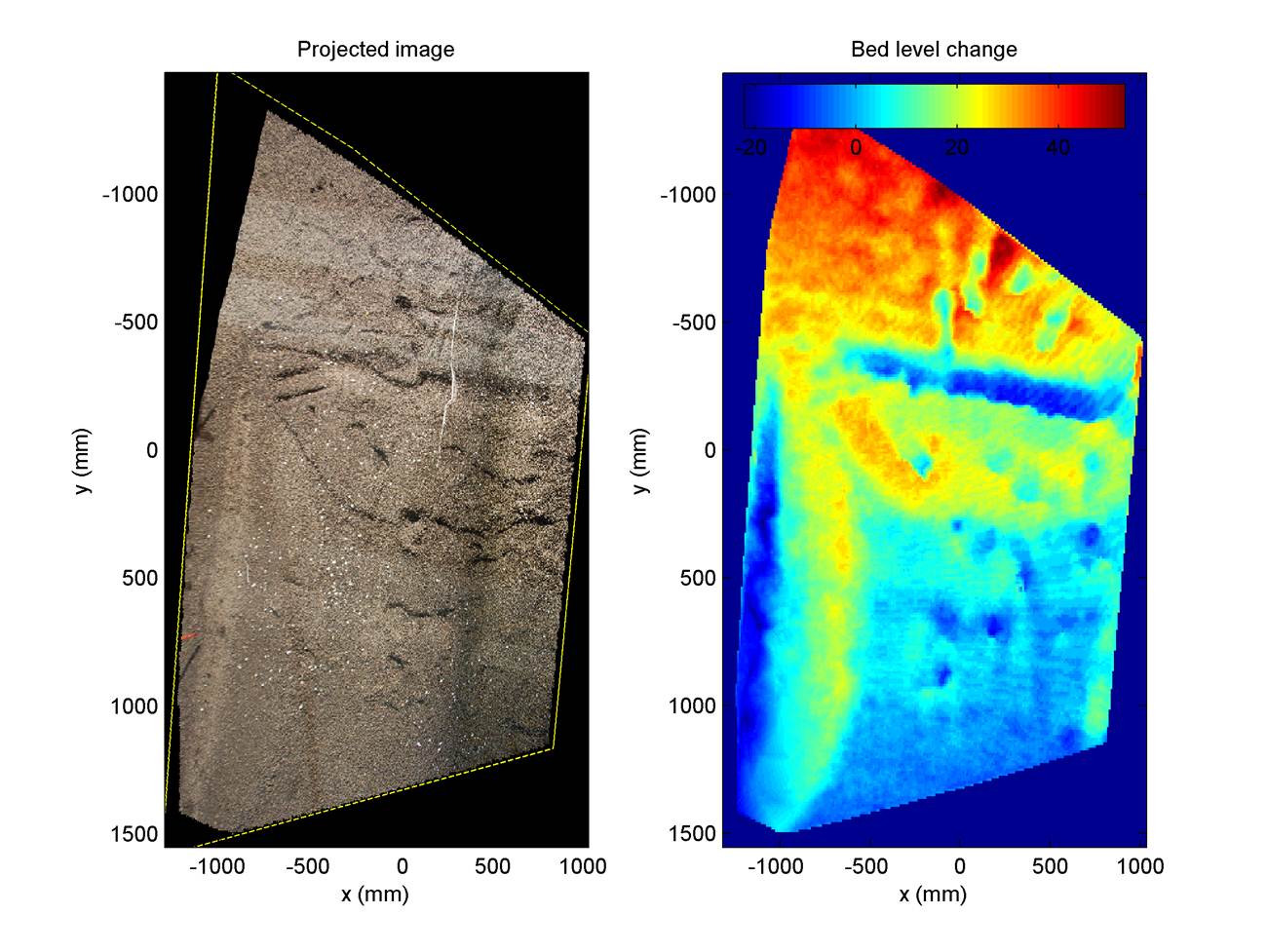 The general aim of the project was to develop and demonstrate on-line tools for reliable predictions of the morphological impact of marine storm events in support of civil protection mitigation strategies. The project was specifically targeted to contribute to the development of a probabilistic mapping of the morphological impact of marine storms and to the production of early warning and information systems to support long-term disaster reduction.

Monitoring of nine selected case-study sites was taking place to collect new data sets of bathymetry and topography using state-of-the-arts technology (Lidar, ARGUS, Radar, DGPS). The impact of the storms on living and non-living resources was be assessed using low-cost portable GIS methods and undertaking post-damage assessments. The regional coastlines were selected according to wave exposure, tidal regime and socio-economical pressures. They included outmost regions of the European Union at the border with surrounding states (e.g. the area of the Gibraltar Strait, the Baltic and Black Sea).

Numerical Models of storm-induced morphological changes were tested and developed, using commercial packages and developing a new open-source morphological model XBeach. The models were linked to wave and surge forecasting models to set-up a real-time warning system and to implement its usage within Civil Protection agencies. The most important end product will be the production of risk indicators with defined threshold for the identification of major morphological changes and flooding associated vulnerability. Finally, the results of the project were disseminated as risk maps through an effective Web_GIS system.

University of Algarve was one of the basic partners in the project and responsible for Work Package 1 related to the review of historical storms that had a significant morphological impact on a representative number of sensitive European coastal stretches.

Praia de Faro was the Portuguese study site for the current project, located in the Southern Portuguese coast. The study site is a mesotidal (tidal range ~3 m) reflective beach with very dynamic morphodynamic behavior. Significant wave heights up to 5 m during storm events are being recorded on an annual basis and the erosion are recovery rates have been shown to be very fast. 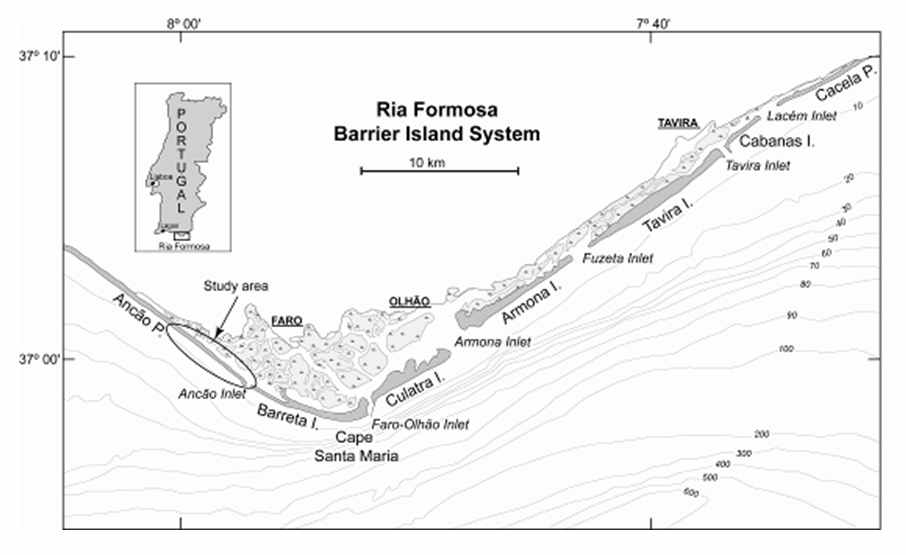 While extensive information exists so far on the morphological evolution, the sedimentology and the hydrodynamics on the area our field efforts were more focused on the monitoring of storm events. Pre- and post storm topographic/bathymetric surveys were a crucial component. In the meantime hydrodynamic measurements (waves and tides) were being collected real-time, which coupled with the Automated video system working on the beach, followed the rapid morphodynamic processes on the study area.

All the topographic and hydrodynamic data were used for calibration/validation of XBeach, preparing a robust and tested tool for the assessment of morphological storm impacts and incorporate it in the final forecasting/early warning system.

See paper about the effect of storm groups on beach erosion and recovery.

See paper about the XBeach calibration and development of an EWS for storm hazard mitigation.

See study on thresholds for storm impacts on an exposed sandy coastal area in southern Portugal.

This website was initiated by Michalis Vousdoukas on 15/11/2008 and updated since then.

The layout is based on a free template TEMPLATED Images: Unsplash (CC0). Most of the images belong to Michalis Vousdoukas